Five Corners Group is not just a consulting company.

We are responsive, innovative, precise and experienced individuals our clients depend on.
We focus on Expert and Forensic Services, Intellectual Property Consulting,
and Presentation Consulting and Technology Services.

SEE WHAT WE’RE ALL ABOUT:

Five Corners Group is proud to have assisted in the trial of former Argentine naval officer Roberto Guillermo Bravo. In total, the jury found Bravo responsible for the extrajudicial killing of three prisoners, and the torture and attempted killing of another in the 1972 Trelew Massacre. The jury awarded $24.25 million in damages, including $12 million in punitive damages, to the plaintiffs—family members of the four victims. 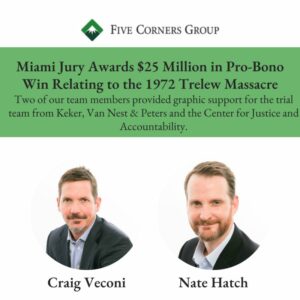 “This was a case where graphics were critical. We needed the jury to visualize the layout and spacing of the cell block area where the victims of the Massacre were shot. Five Corners Group painstakingly recreated the scene from multiple perspectives, working with measurements from our forensics expert. Their graphics laid out the implausibility of the defendant’s story and ultimately controlled how everyone thought about the massacre. They are also complete professionals, staying up throughout the night to perfect our closing graphics. Five Corners was a key part of this win.”

For more information please click the article below [LINK TO: https://lnkd.in/gtZXrUR9]

Jed Greene, a Principal of Five Corners Group, shares his thoughts with LES Insights on recent patent law and its effect on the value of US Patents